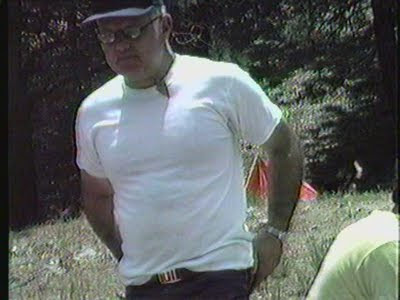 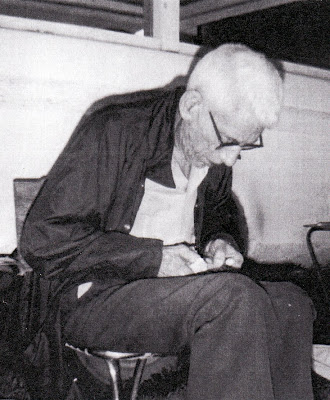 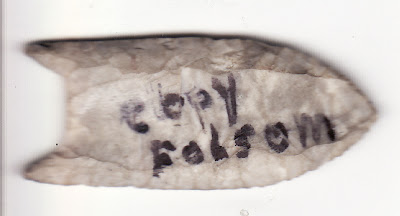 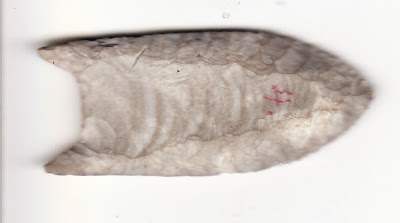 At the 1980 Little Lake Knap-In, sponsored by the folks who brought you Flintknapper's Exchange, J.B. Sollberger made a variety of flint fluted points.
This one here was one of them "Solly" gave it to Terry Frederick, whom in turn gave it to Ray Harwood (me). I have many Sollberger poits, but this is my favorite.
In 1985 I brought my arrowhead collection to Los Angeles, for Kurt McKnight to photograph. As I stoof outside his studio a man grabbed the collection of arrowheads of my tail gate and ran down the street. I ran after him a feld him with a hammer stone. The points flew out of the case and shattered on the street. The gash on the lower esdge is the character mark from this ordeal. TERRY FREDERICK (bald guy)
SOLLBERGER (old guy).


Folsom points are found widely across North America and are dated to the period between 9500 BC and 8000 BC. The discovery of these artifacts in the early 20th century raised questions about when the first humans arrived in North America. The prevailing idea of a time depth of about 3,000 years was clearly mistaken. In 1932, an even earlier style of projectile point was found, Clovis, dating back to 13,500 years ago. Clovis points have been found in situ in association with mammoth skeletons


A Memorial to J.B. Sollberger
by Errett Callahan
(from Bulletin of Primitive Technology, 1995)

" J.B. Sollberger was one of the greatest flintknappers of our time - - of all time. He was born in 1915 and he died May 7, 1995, 80 years later. The flintknapping world will be lonely without him.

I first met Sollberger a quarter of a century ago and maintained a student-guru friendship with him ever since. He was one of only five Master-level knappers which I recognize of this era. When Don Crabtree and Francois Bordes died in 1980 and 81, we were left with just three. Now we have lost Solly and are down to two - - Gene Titmus and Jacques Pelegrin.

As I was passing thru Dallas on a trip out West back in 1969 (or was it 1971?) I contacted Dr. Vance Haynes at S.M.U. and asked if he knew of any flintknappers in the area. He told me about someone he'd heard of named Sollberger "

IN MEMORY OF MY FRIEND, J.B.SOLLBERGER
BY: RAY HARWOOD


THE TEXAS MASTER; In the states of Texas was a long lean bloke, it
wasn't Johnny Smoke, it was paleo flintknapping pioneer, J.B. ( Photo By Thompson)
Sollberger. I was aquatinted with Mr. Sollberger and know that he was
a true master flintknapper and influence to hundreds.
Though they were contemporary, Carabtree and Texan, J.B. Sollberger
spurred on two separate schools of thought. Crabtree the obsidian
school and Sollberger the Texas flint school. Though both are
flintknapping, the methodology is very different.
In the realm of thought and mental visualization, deep in the mind is
the perfect visualization or pure idea, the mental template. For most
craftsmen by the time this idea becomes a piece of work it has lost a
bit of perfection. On rare occasion it is manifested in a piece of
art work, this was the case with the magnificent flintwork of J.B.
Sollberger, of Dallas, Texas.
Sollberger was a true flintknapping pioneer and a legend in his time.
Not only was Sollberger a master knapper, he was truly a gentleman
and humble as well. He was very analytical with his theoretical
papers and articles being the best in the field. His literary works
were of the highest quality where he published in many journals
including American Antiquity, Lithic Technology, Flintknappers'
Exchange, Flintknapping Digest, and The Emic Perspective.
J.B. Sollberger started flintknapping when he was middle aged, some
time around 1970. He always had a curiosity about knapping but didn't
get the "lithic erg" until he observed a scrapper making
demonstration at the 1970 Dallas Archaeological Society meetings.
Ironically Don Crabtree came to Dallas to the meetings but J.B.
Sollberger had to work so he missed the opportunity to meet Crabtree.
The next week he tried to make up for it buy going on his first flint
hunt and ordering Crabtrees book. Upon reading this, Sollberger got a
basic tool kit together and began experimenting.
Sollberger recalled seeing a forked stick in a museum in Texas as a
boy and began experimenting with his famous "fork and lever" knapping
style. Sollberger was very successful in his experiments and was soon
making fine arrow heads with his rig.
According to Sollberger (1978) " back in 1933 I suppose, we were just
boy artifact collectors. We made this trip to San Antone to see the
Witte Museum and inside they had a forked stick a little over a foot
long with something like 3/4 of an inch gap between the two forks. It
struck me that pressure flaking could be done with leverage by laying
the biface material across this forked stick and using the fork as a
fulcrum for a lever".
In 1990, John Wellman spoke to Solly and said that Solly was really
interested in the East Wenatchee Site in Washington and he had made
several large fluted points including an eight inch Cumberland he had
spend eight hours preparing and fluted off the tip. This was really
advanced work for the year and to me Sollberger's work remains
unsurpassed.
Bob Vernon, an old time Texas knapper once conveyed this story about
Sollberger to me: " If any of you ever had the privilege of sitting
alongside Solly at a small knapping session, you'll remember his dry,
but gentle, humor. Like the times when he would say, " That platform
looks a like a strong `un- guess I better drag out ol' "he-poppa-ho"
(his mega-moose billet)."
Almost all Sollberger's work was in flint or chert, I have only seen
one item made by Sollberger of obsidian. The obsidian point is in the
collection of Steve Carter, a master flintknapper from Ramona,
California. The obsidian point was very nice and very delicate, this
shows the diversity in craftsmanship Sollberger had. The last time I
spoke to J.B. Sollberger he was crafting a set of masterful flint
Folsom points out of Texas flint. He had made quite a few thousand
points in his time and was using 1,000 pounds of flint a year. Even
when Sollberger was quite old he continued being very active in
knapping and writing. In a letter from Sollberger to Steve Behrnes
Sollberger described this incredible expedience, " My house, on
Monday nights, is known as the Sollberger Clovis Factory. Joe Miller
and Woody Blackwell made Tee Shirts to that name which we often wear.
Dr. Ericson, David Hartig,Gene Stapleton, Jess Nichols, are regulars
who concentrate on fluting." J.B. Sollberger died on Sunday, May 7 at
Baylor University Medical Center in Dallas from emphysema. He was 80
years old. Many rumors have surfaced in the years after his death,
that Solly died of silicosis, this is simply untrue. According to the
Dallas Morning News, Solly donated his collection to the University
of Texas, where they will be used for study. In my collection I have
several Sollberger points, the one that is my favorite has written on
it "to my friend Ray Harwood from J.B. Sollberger," I use that point
as inspiration for my own knapping
Posted by THE RESEARCH JOURNAL at 8:23 PM No comments: