Paleoindian archaeology lost one of its mavericks with the passing of Tony Baker on May 30, 2012.  Tony will be remembered for harnessing the powerful new medium of the Internet to share his archaeological interests with readers around the world, no matter their academic pedigree or background.

Born Ele Antoine Baker on October 20, 1944, Tony was raised in Albuquerque, where he attended the University of New Mexico and earned a BS in Civil Engineering in 1967.  This led to a long career with Texaco, where he worked as a petroleum engineer in west Texas, Wyoming, and Colorado.  He married his beloved wife Simone on February 17, 1969, and raised two children, William Anderson (Andy) Baker and Traci Michelle (Missy) Jervis.

Tony had a lifelong interest in prehistory, inspired by his family’s role in Great Plains and Southwestern archaeology.  His grandfather, William E. Baker, was the county agricultural agent in Cimarron County, Oklahoma and was well known for amassing an impressive collection of Paleoindian (and later) artifacts that emerged from the Dust Bowl blowouts.  Tony’s mother and father, Jewel and Ele Baker, tried to make archaeology their livelihood, working on WPA archaeological projects in the Texas Panhandle and throughout central New Mexico.  Yet making archaeology a profession was tough in the 1930s, and the Baker family ended up on another path.  Beginning in the 1960s, Tony and his father renewed the family interest and began surface collecting artifacts from around the Albuquerque area.  Over time they acquired a large and well documented collection.  This landscape-scale inventory has provided fodder for many other Paleoindian investigations, by researchers such as Jim Judge, Dennis Stanford, Phil LeTourneau, Dan Amick, and the author, among others.

Tony furthered his archaeological journey by taking graduate classes in the late 1980s, and earning an MA degree in Anthropology from the University of Colorado-Denver in 1990.  His thesis focused on projectile point resharpening (Baker 1990), using artifacts from his family collection.  Tony’s unique contribution to the world of archaeology began in 1996, when he launched his website “Paleoindian & Other Archaeological Stuff.”  This was Tony’s forum for sharing his archaeological views with anyone who happened to stumble upon the site.  I remember being in awe while visiting Tony’s home in the late 1990s and seeing his notebooks full of printed correspondence from interested readers across the world – obviously his work was being noticed!

The website evolved over time, with Tony adding several pages per year.  Topics ranged from his views on Paleoindian technology, especially Clovis and Folsom, to his ideas of Pre-Clovis archaeology, Acheulean handaxes, and Archaic traditions in New Mexico.  Well informed, but not pretentious, his webpages had broad appeal.  He was most proud of his work modeling the fracture mechanics of lithic flakes, using engineering software.  Inspired by the work of Andrew Pelcin, Tony attempted to model fracture initiation and propagation, controlling for platform, core, and anvil shapes.  These computer models were then compared to archaeological examples as well as experimental flakes, knapped by his friend and colleague Bob Patten.  This work was typified by such web pages as “Digital Crabtree: Computer Simulation of Folsom Fluting” (Baker 2000b).

After his retirement from Texaco in 1999, Tony was able to devote more time to his website, fieldwork, and conferences.  The last 15 years saw Tony in regular attendance at the annual meetings of the Society for American Archaeology and the Plains Anthropological Society.  He was a contributor to the two Folsom workshops held in Texas in the late 1990s, documenting them through his webpages.  Fieldwork took him to Alaska, where he spent many summers volunteering for the BLM on the North Slope, working with his friend Mike Kunz (Rinella 2007).  One of my fondest memories of Tony is when we were able to work together at the Nall site, a Paleoindian camp discovered by his grandfather in the 1930s.

Tony will be dearly missed.  He was not afraid to speak his mind and he told it as he saw it.  Sometimes blunt, sometimes not, Tony was always looking for new friends to talk rocks.  Baker’s contributions will probably never be fully appreciated by many in the professional archaeological community, in an era where contribution is measured mostly by the volume of articles and monographs produced.  But Tony’s website will be remembered as one of the earliest archaeological crossroads, created at the beginning of the widespread use of the Internet.  His ability to reach an interested audience, whether professional or avocational, should be admired and emulated in the years to come.  The hundreds of thousands of website visits surely attest to that.

Tony’s family will continue to maintain his website, so that his work and memory live on.

Rinella, Steven
2007  Meet the Flintstones.  Outside Magazine, August 2007 (an account of a North Slope archaeological survey with Tony Baker and Michael Kunz).

Baker, Ele A. (Tony)
1996a   Images from the Asian Steppe.
1996b  Projectile Refurbishing.
1997a  Art and The Folsom Point.
1997b  The Belen Point: Plainview Variant?
1997c  The Clovis First/Pre-Clovis Problem.
1997d  The Folsom Workshop: A Conference on Prehistoric Replicative Folsom Knapping.
1997e  The Paleo End Scraper.
1998a  Application of Finite Element Analysis to the Understanding of Flake Formation (Tony Baker and Andrew Pelcin).
1998b  Folsom Point Manufacture.
1999  The 2nd Folsom Workshop (1999): A Conference on Prehistoric Replicative Folsom Knapping.
2000a  The Clovis/Folsom Transition.
2000b  Digital Crabtree: Computer Simulation of Folsom Fluting.
2000c  The New Mexico Archaic / The Oshara Tradition.
2001a  My Parents, The Archaeologists.
2001b  Transporting and Caching Lithic Material in Biface Form.
2001c  Understanding Flake Mechanics:An Unifying Theory.
2002  Variation in Paleoindian Lithic Assemblages Through Time.
2003a  Contrasting the Lithic Technologies of Mesa and Folsom (Tony Baker and Michael Kunz)
2003b  Static and Dynamic Loading Modes.
2003c  A Theory for Flake Creation.
2004a  The Clovis First/ Pre-Clovis Problem: Revisited 2004.
2004b  The Lithic Containers of the Archaeological Record .
2005a  Bruce Bradley Has Gone Academic.
2005b  The Elephant in the Parlor: Another Story about Sandia Cave Based on an Interview of an Individual Who Excavated in the Cave.
2006a  The Acheulean Handaxe.
2006b  The Flake: Stepchild of Lithic Analysis.
2006c  North Slope Slide Show.
2007a  The Acheulean Handaxe at Boxgrove.
2007b  Pleistocene Bones and Stones in the New World.
2007c  Recycling.
2007d  Tony's Quick and Dirty Opinions.
2008a  Dear Arrowhead Hunter.
2008b  Lithic Artifacts from North of the Arctic Circle.
2008c  Marvin McCormick -- The First Modern Fluter.
2008d  A Simple Request.
2009a  The Antler Foreshaft -- The Original Shrink Wrapped Package.
2009b  I Forgot to Remember to Forget: 1st Peoples in the New World
2010  The Invisible Signature of the Folsom Point Knapper.
2011a  Definition of Flake Types.
2011b  From Mesa To Monte Verde (Michael Kunz and Tony Baker)
2011c  Lithic-Rich and Lithic-Poor Environments.
2011d  The Santa Claus Paradigm. 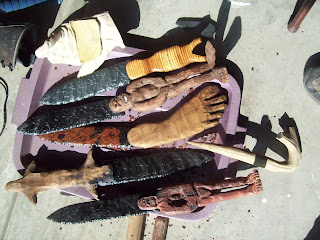 Posted by THE RESEARCH JOURNAL at 7:38 AM No comments: